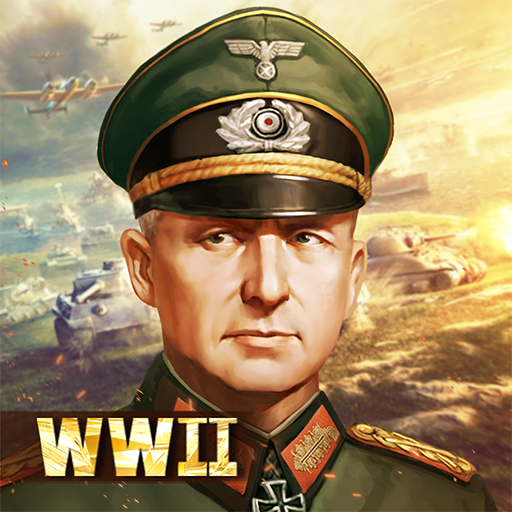 World War 2 has begun, and you will join the important historical battles from 1939 to1945.
More than 100 famous generals including Barton, Zhukov, MacArthur, Guderian, Montgomery, Eisenhower and Manstein will be on the stage in turn.
Take advantage of the generals, find out the enemy's weaknesses and defeat them.
Recruit special force from the Axis and Allies and cooperate to gain victory.
More than 60 kinds of special force are waiting for you to recruit, including German Tiger tank, Mortar Karl, Soviet Katyusha rocket, KV Tank, US Army 82nd airborne regiment, and British Royal SAS regiment.

***New engine production allows to experience real and rich terrain on the battlefield!
The jungle beach in the west, the desert in North Africa, and the ice and snow on the east line cannot stop you towards victory.

***New special force system allows you to incorporate special force into your own troops.
It has a variety of units of special air defense functions such as air defense, airborne, and building.

***Original reinforcement system can supplement the military strength, scout the enemy's situation, and develop your regiment!

***New changes in naval warfare allow you to feel the range and volume of real naval warships!

***Military units from over 200 countries, more than 100 generals and more than 60 special force will join your battlefield.

[Campaign]
***There are more than 120 historical scripts in six war zones, and you can experience these real historical battles respectively from the Axis and Allies.
***Achieve the mission goals in the campaign: capture the target areas, rescue the friendly forces, break the encirclement, defend the position, and annihilate the enemy on a large scale etc.
***Every decision you make will determine the outcome of the campaign, including recruiting units, air strikes, airborne landing, dispatching special force and generals, and hiring reinforcements.

[Group Army]
***Deploy group army. Each country has its own unique technology card which can be used to speed up the process of conquering the world.
***A flexible diplomatic system and a rapidly changing situation of conquest. An enemy or a friend? It all depends on your diplomatic strategy.
***Use the least rounds to eliminate hostile forces, conquer the most territories, and obtain higher scores.

[United Front]
***Every battle is a war of attrition. Use our limited forces and maximize combat effectiveness!
***Develop reasonable tactics, use terrain effectively, and allow your troops to survive in difficult battlefields.
***Achieve the goals as soon as possible, eliminate enemy and reduce casualties so as to obtain high scores.